Hi, all! So, I mentioned previously that I moved to an old house recently. This house was in great shape, but I really wanted to update the decor. To that end, I thought I'd start with the guest room!

The room had some very strongly salmon-colored walls, a stained and dirty area rug, and all the cool woodwork was painted over. Was it lead paint? Who knows! (I do plan to test it for lead before doing anything with it.) All in all, I thought that getting the floors in order first would be my best bet. A quick sanding, maybe stain, and some varnish, and they should be good to go! 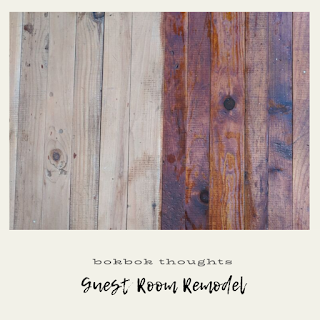 The first thing I had to do was get rid of the area rug. I want to have the floor in there be all wood with a couple of throw rugs on either side of the guest bed, because it'll be easier to not have to vacuum - run a dust mop along the floor once a week or so, beat the rugs as needed, and I should be set!

Well, once I got the rug out of there, I found the center of the floor had not been varnished like the perimeter had. It appeared to be untreated wood, and there were some water stains, and many paint splatters. No wonder the previous owners had thrown a rug down! The planks weren't even the same size in the center as the planks around the sides, and there was no pattern to it like there was around the perimeter. We don't really have the budget currently to redo the floor completely, so I had to make this work.

Tools and safety info: I always use a respirator if I'm doing anything with the potential for dust or fumes. I always use earplugs when using any sort of power tool. Safety glasses are another must-have. For this project, I probably should have had full-blown goggles (with a tight seal all around your eyes), but I had safety glasses, so I used those - the dust still blew up and around the sides, though I did have less dust in my eyes than I would have with no glasses.

Lastly, I have this disc sander that I found, brand new, at a garage sale back in Oregon. It is my only power sander, and worked great for touching up the floors in our last house before we sold it. I knew it'd take a while to do a whole room - which it did - but I got it done. And wow, what a difference it made!

As you can see, the paint splatters are no more. Most of the water stains came up, too, and the wood looks less weathered. Sanding the perimeter was a little tougher because as the varnish there heated up from the friction of the sander, it gummed up my sandpaper disc a bit, so I had to take frequent breaks to let everything cool down. There's got to be an easier way - probably a stripper of some sort - but I did not do any sort of research beforehand. I just kind of jumped in, and it worked out pretty well this time!

There were some spots where the center planks looked like they had chunks missing. I patched those with some wood filler.

The last step was to put a nice, thick layer of polyurethane over it. It's longer-lasting than wax, and will hold up to wear-and-tear such as people walking on it. I got the oil-based, which adds a warm glow to the wood.

Here's where I started, and the final result!

So, were there some things I could have done differently? Absolutely. I mentioned the varnish stripper before - I'm sure that's a thing that exists. I also mentioned that I wished I had actual safety goggles instead of just glasses; glasses helped, but goggles would have been better. I also definitely could have used a pair of knee/shin pads; being down on all fours for several days' worth of sanding was a little rough, and I wound up with bruises up and down both legs. Even easier would have been to rent one of those big sanders I see on the house-flipping shows. Oh well, now I know for next time! :)

The next remodel project I plan to do in the guest room involves the walls. I want to remove the wallpaper and repaint the walls. Lead testing swabs are coming in the mail, in case there's paint under the wallpaper - I'd like to know what I'm dealing with! I'm still working on my color scheme - probably something in the blue-to-gray family, though I'll have to play around with some paint chips and see what looks good.

Have you remodeled part of your house? How'd it go? Tell me about it in the comments!

See you next time,
~Carly
Posted by Carly (bokbok jewelry) at 9:41 AM No comments:

Boy, it's been a while again, hasn't it? There's a very good reason for that - we moved across country! I'm out of Oregon for what feels like the first time in my life, and settled into a fabulous Victorian house in Pennsylvania. The Victorian era is one of my favorite time periods - the literature, the motifs, the architecture - and I am so glad to be the proud owner of a piece of that history.

I have my own space now for my work, instead of sharing a room with my husband's office, and I have been updating my store to get it into shape for some new pieces. This has been very time-consuming, but it's something that needed to happen!

The closing down of Tictail was ...eh, not a big blow to my shop, per se, but it's been a change. I hadn't updated my Zibbet shop in the time that I was on Tictail, because that's where I was focusing my efforts. I'm back on Zibbet now, though, and wow! There have been a lot of changes since I was last active there! Zibbet's new sales channel management looks like a game-changer to me, for the world of e-commerce. I can't wait to get my shop updated and check out the rest of what Zibbet offers.

Speaking of updating my online store, I have some super-cute pieces to list once I get the photos finished. Here's a sneak-peek:


Adorbs, right? I made matching sets of necklaces and earrings with these ceramic critter beads, and I'm figuring out a bracelet design, too.

And speaking of adorable, we have a new member of our family... 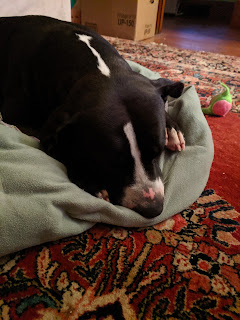 Blogger, meet Tulip! She's a sweet pittie mix that we adopted from the Erie Humane Society. Our fur-baby, Tank, passed away a month before we moved, so once we got settled in to the new house, we just had to get a new dog. Our cat doesn't much like her yet, but it's just a matter of time and patience with him - he hates everyone at first, haha.

Well, I have no idea if I still have anyone following the blog, since it's been almost a year since I last posted (whoops), so if you're out there, give me a holler in the comments!
Posted by Carly (bokbok jewelry) at 2:10 PM No comments: