Hi, everyone! It's that time of year again - school's back in session, the weather is cooling down, and people are looking ahead to the holiday season. For me, it's all of those, plus it's my busy time, when I attend the bulk of my craft shows!

So, here's what's coming up on the calendar for BokBok Jewelry:

I'm still on the hunt for shows to fill up some more weekends before now and Christmas, so if you know of any more craft fairs or bazaars that could use a handmade jewelry artist, let me know!

Hi, everyone! I was getting ready for another round of craft fairs - the one I just did was for the Fourth of July Festival in Monmouth, Oregon on July 3-4 - when I thought y'all might like to see what I was working on to prepare!

This was my first two-day show (that I can remember) and my second outdoor show. I learned at my first outdoor show that my foamcore risers, which work great indoors, are prone to flying when outside. Whoops!

Luckily, I have an amazingly supportive husband, and he helped me build a wooden set of risers based on this pin from Pinterest. It came together pretty easily - I am a novice when it comes to power tools, but I got this cut out and put together myself. My husband double-checked my measurements for me, and he helped hold wood while I was cutting, and that was it. :)

I measured the area I wanted the risers to cover on my table, as well as how high I wanted them to go, then sketched out a rough plan for the supports. I wound up drawing a 24"x18" rectangle with the zig-zag stair pattern through it. The spaces where the steps will go are 6" wide and 6" apart (height-wise). Here's a couple photos of the sketches to show y'all what I'm talking about: 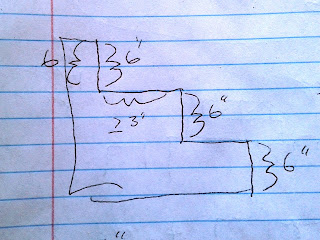 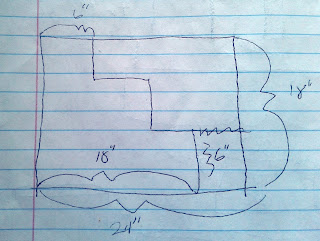 Unfortunately, I forgot to take photos of the piece in progress. I was in such a rush to get it done! I'll describe it the best I can...

Step One was to mark out, on the plywood, where I wanted to cut out the big rectangle.

Then I cut it out. I used the circular saw for this.

Next, I centered my circular saw blade above where I wanted to do the tricky "staircase" cuts. I lifted the blade a bit, got it going, then lowered it. This cut a nice little slit where I needed it. The two halves of my staircase supports were still connected at the end, so I used the jigsaw to finish the cuts - I just inserted the blade into the cuts from the circular saw, and cut through the last inch or so on each end of the cuts. Worked like a charm!

Fourthly, I took a look at my leftover plywood for cutting out the steps. I had a nice piece that was 24" by about 36" that I could get by following one of the earlier cuts from the staircases, and I decided that'd work great for the steps. I only needed three steps, but that gave me four, which was great because you never know when you need a spare.

So, my steps were 6" deep by about 36" wide. I measured the big chunk I had just cut off, quartered it off into steps 6" deep, then made my cuts with the circular saw.

Then I took the dowels, marked them off every five inches, and cut them. These would be the supports under the steps that go on the staircases to hold everything together.

I sanded down all the edges to minimize splinters, then started measuring. My cuts were not the straightest (pretty darn close, though), so I used the carpenter's square to measure from a clean edge to where I wanted the outer edge of my staircase to go, then used the square again to mark two straight lines across the bottom of both ends of the steps. My plywood was 1/2" wide, so the lines were about 1/2" wide (erring a bit on the side of being too wide, so that they'd actually fit on the staircases).

Next, I placed a piece of the dowel on the underside of a step, lining it up with the line I had marked earlier, and clamped it into place on both ends.

Then, I pre-drilled holes where the screws were to go, starting with the dowel and going down through the step (two holes total, per dowel). In hindsight, I should have slapped some painter's tape or masking tape on the step to prevent splintering. Live and learn!

I then removed the clamps, slapped some wood glue on the dowel between the holes, and lined everything back up. If I had glued where the holes were in the dowel, I wouldn't have been able to line them up with the holes in the step. Once it was in place, I clamped the dowel again, then flipped the step over and screwed it to the dowel from the top side of the step. I repeated that for a total of twelve times - four dowels per step, for three steps.

Once that was all done and dried, I stained every edge I could reach. I didn't get between the dowels very well, but they're hidden by the staircase anyway, so it all worked out. I haven't made the time to seal the risers yet, but that would be the next step. You can stain them whatever shade you want, or paint them, or leave them plain - it's up to you - but I would definitely seal them. 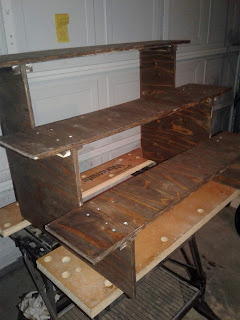 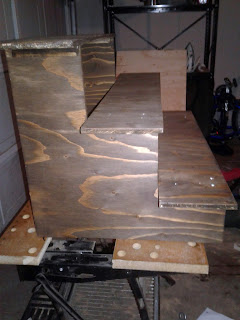 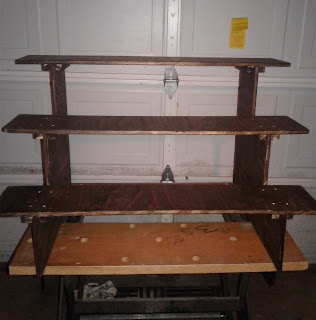 And here's it in action at the Fourth of July Festival: 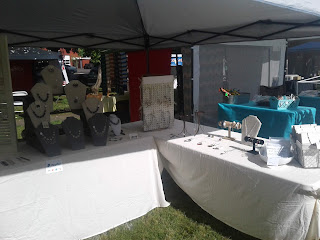 Skill-wise, this was a fairly easy project, but it was definitely time-consuming. Totally worth it, though.
~Carly

Have you built your own crafty project before? Tell me about it in the comments!
Posted by Carly (bokbok jewelry) at 11:33 AM No comments:

Hi, everyone! It's the first day of summer, and you know what that means - weather permitting, it's the season for barbecues, sunbathing, beach trips, and all-around fun in the sun! 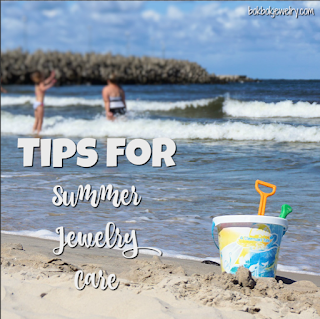 With all that fun, though, you need to take care of your jewelry. Nothing wrecks the beautiful shine on jewelry quicker than sweat, lotion, and water (especially lotion, hoo boy).

So, here are some common threats to your jewelry that you'll find in summer, and what to do about it:

1. Sweat
It's kind of gross, but let's face it: pretty much everyone sweats. The salt and moisture can wreak havoc on the finish of jewelry.

2. Salt Water and Pool Water
It's best to just avoid wearing jewelry in the ocean or the pool if at all possible. The water can leave a scummy-looking residue, and some pool chemicals can actually wear down the finish. Additionally, sand at the beach can, well, sand down your jewelry, leaving it dull. Sand can also get wedged into stone settings, loosening them and leaving it easier for the stone to fall out.

3. Sunscreen and Lotions
Just like sweat and water, sunscreen and lotions can also leave a film on your jewelry, dulling the shine.

4. Sun
Yep, the sun! Some stones, like amethyst, are sun-sensitive and will change color after exposure. Stones that have been dyed or treated can fade in the sun, too.

5. Heat
Heat, too, can affect stones in jewelry. Stones can crack when going rapidly from hot to cold, like going from the hot tub to the pool. Heat can also make metals soft, and may deform wire wraps, chain, or metal bands. Story time: way back when my husband and I got married, before I knew some of this stuff, we used to wear our wedding bands in the hot tub. Both of ours are now so deformed from knocking them on the doorway on the way back in that they're basically unwearable. Learn from our fail! :)

So, what are you supposed to do? Me, I wear my jewelry in the summer (except for into the ocean or pool), try to prevent issues when I can, and take care of it afterward.

Take your jewelry off when applying sunscreen, and wash your hands afterward before putting your jewelry on. Try to avoid wearing your jewelry in pools or on the beach. When you're done wearing it for the day, wipe down your jewelry with a soft, slightly damp cloth. Store your pieces in a dry, clean, relatively dark location. Jewelry boxes with felt or some other cloth lining and dividers are best - they keep the jewelry from knocking against each other and forming scratches.

Have any tips or disaster stories you'd like to share? Leave a comment and tell me about it!
Posted by Carly (bokbok jewelry) at 5:13 PM No comments:

You may be wondering why it's been so long - there are a multitude of reasons, all of which boil down to taking care of myself and my family. :)

I'm going to try to get back into the swing of things, though. I've been working on a schedule for myself so that my business stuff won't mess with family time too much, and I've finally gotten a handle on the housework, woo-hoo!

I've been focusing more on doing craft shows, too - I've got one in Monmouth, OR on July 3-4, and another in Salem towards the start of August. I'm still signing up for fall shows (mid-valley area of Oregon), so if you know of any that could use a jewelry artist, let me know!

Hope to "see" you again soon,
~Carly
Posted by Carly (bokbok jewelry) at 5:12 PM No comments: