So, back when I was pregnant, I spent a decent chunk of time "collecting" projects to do with my future kid. Mainly through Pinterest, I found a lot of fun sensory activities. Today, I tried clean mud for the first time. I had seen it on Pinterest (here is the blog post where I found this activity), but I winged the recipe today. 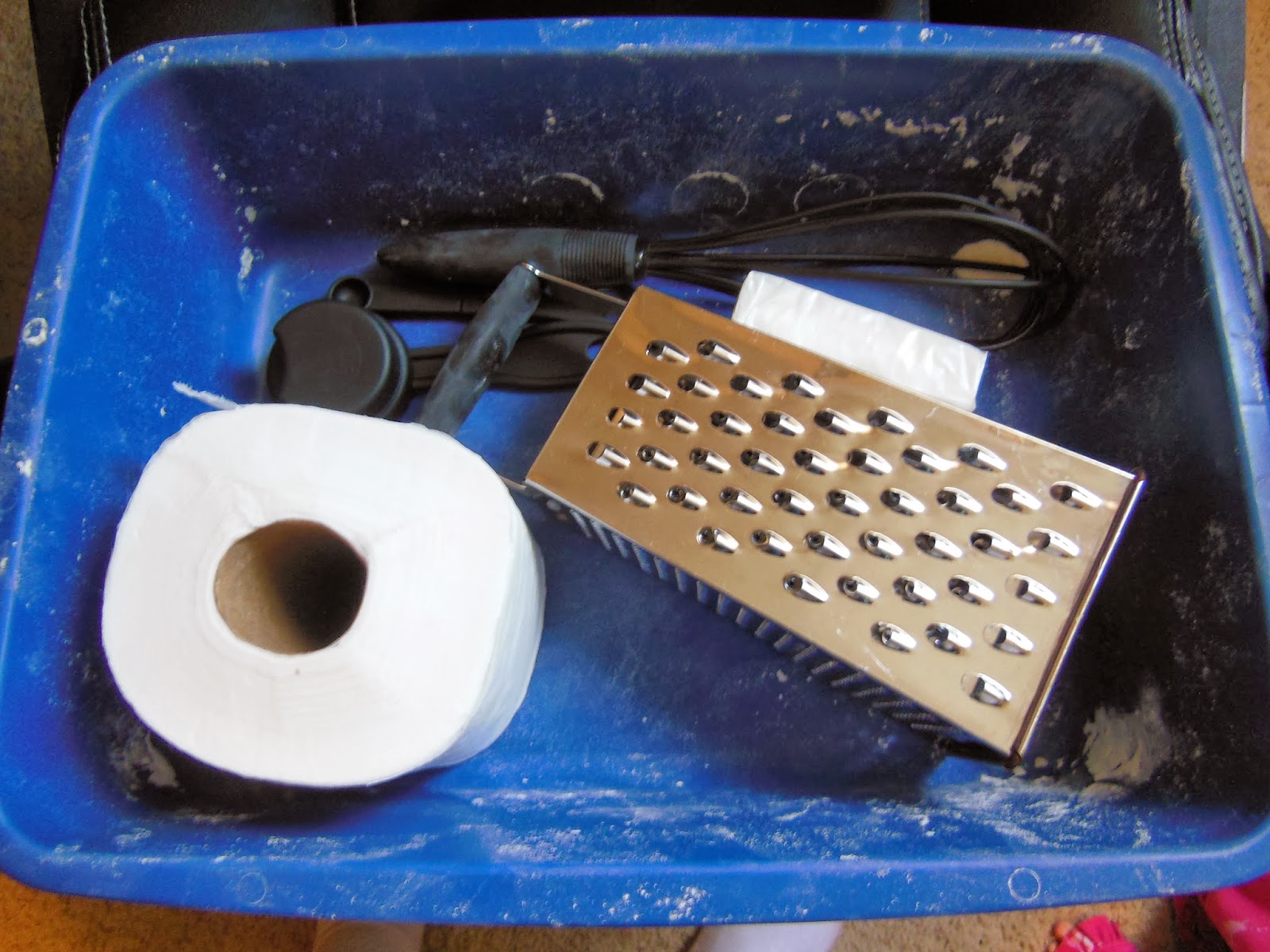 First things first: Gather your supplies. I grabbed a whisk, some measuring spoons, the grater, the soap (Ivory brand), the TP (store-brand 2-ply), and a litter-box tub from the Dollar Store that I bought specifically for kid-stuff. I set up station in the bathtub because it makes it super-easy to clean up. Kiddo was in her swimsuit. 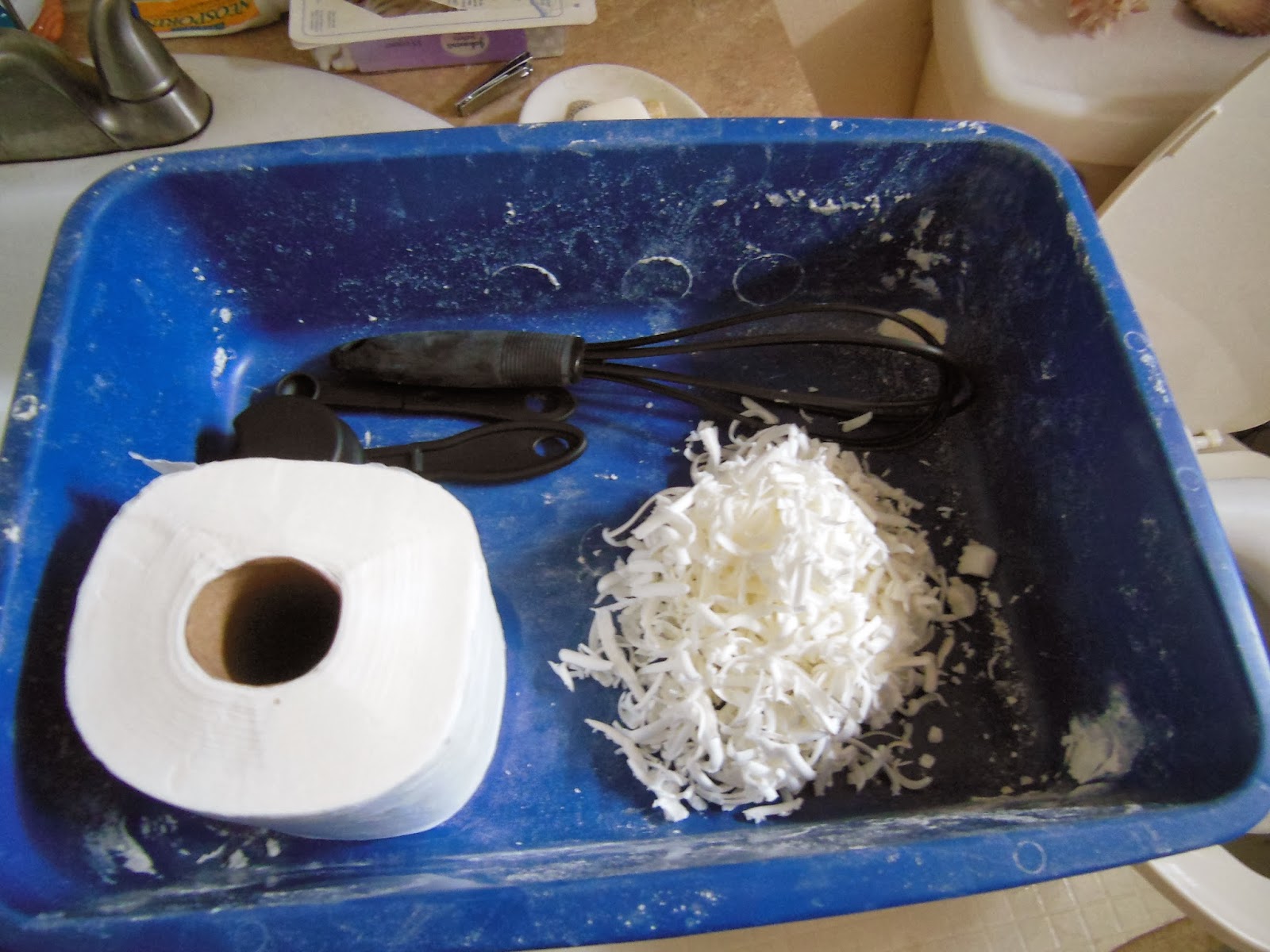 Then, grate the soap while everything is still out of your kid's reach. I nick myself on graters often enough that I wanted my daughter nowhere near that thing. :P I learned two things while doing this: first, that soap is really, really easy to grate; and second, that grated soap has a very strong smell. It wasn't unpleasant, but it was very pungent.

Next, I got everything (including the kid) into the bathtub to shred some TP. I didn't know how much to use, so I unfurled about 12 feet of it to start. I was expecting my kid to help with this part, because normally she likes tearing paper - R.I.P., half of her sketchbook, countless napkins, and the first page of Dr. Seuss' The Foot Book - but she was content to watch. She did pick up some shreds that didn't make it into the tub, so she was a helper, just not in the way that I was expecting (and that's okay). 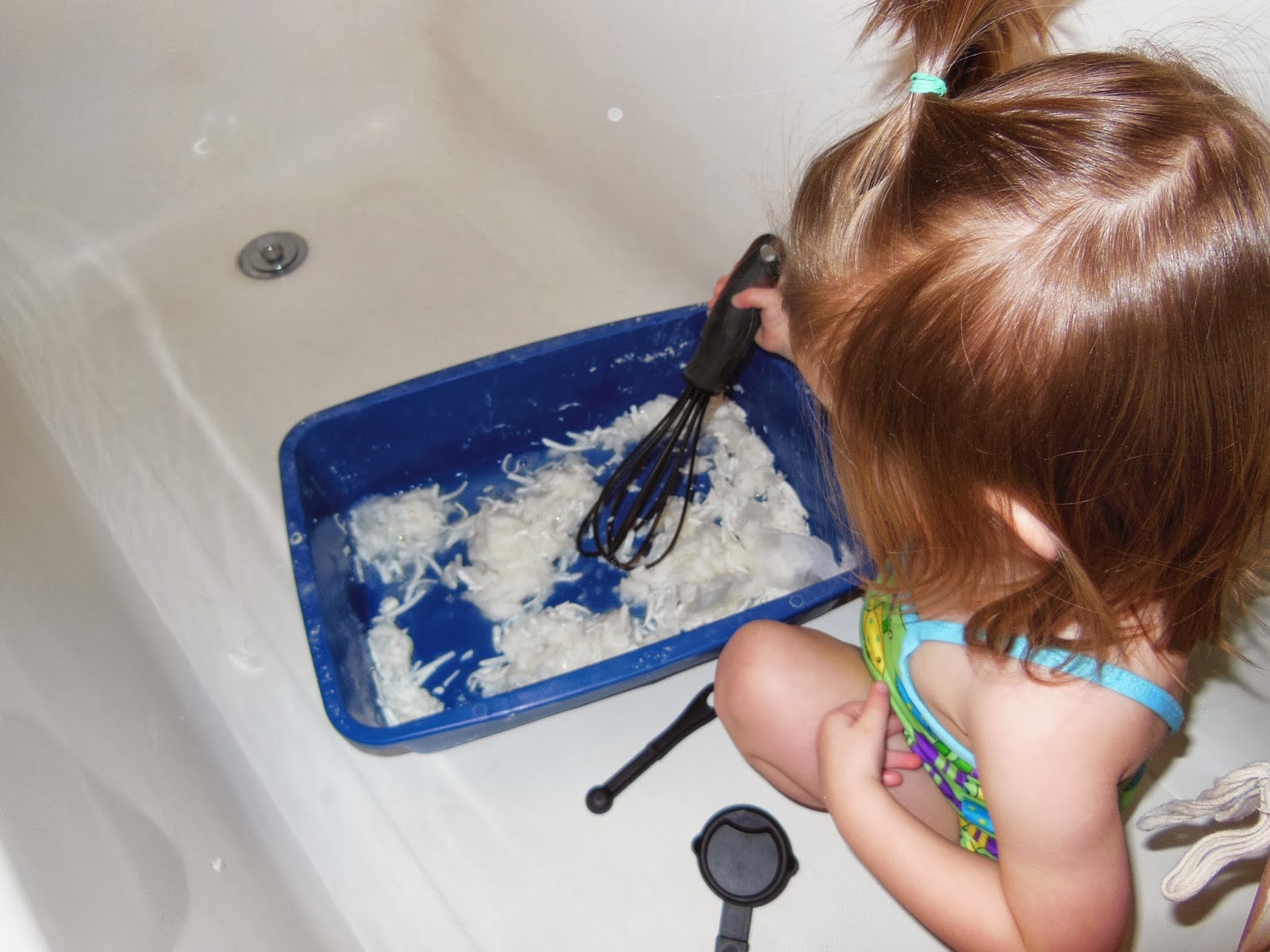 The next thing I did was add some hot water and handed my girl the whisk. (Note: I know my kid and her current love of tools, so I used straight-hot water. If your kid is more the hands-on type, you may want to use warm water instead. Either way, the water needs to be fairly warm so the soap will melt.) I started with 2 cups of water. It was a little soupy, so I added more TP. After some stirring, there was still unmelted soap, so I added two more cups of water, and some more toilet paper. Then I called it good. All told, I used about half a roll of toilet paper and a total of four cups of water.

The texture reminded me a lot of the mud-slop at the bottom of some natural hotsprings I've been to - wet, gloppy, yet silky-smooth, especially after a good bit of stirring. It smelled a lot nicer than the hotsprings, though. If it was me, I could have played in the clean mud all day. My daughter, bless her heart, was less than thrilled with it. She liked stirring it with the whisk, and she would delve into the "mud" to grab a spoon; there were many gasps of surprise and/or delight while she was exploring, and she held up one of the tools to tell me something about it (not sure what, as she's not quite talking yet, but there were a lot of babbles). However, anytime some soap-mud got on her hand, she would cry, "Ewww!" and either fling her hand around or wipe it on the bathtub (or both).

Even though she didn't seem to like the feel of the clean mud as much as I did, she played in it for almost an hour. She took three taste-tests to decide that soap was not for eating, and stuck to stirring the mud after that.

When she was done, I removed the mud-tub and all the accessories I had gathered, then turned on the shower. This was also her first time experiencing the shower. She normally hates getting her hair and face wet, and she tried to climb out at first, but after some reassurances (and after I moved the shower-head to aim more at the faucet than at the back of the tub), she was content to sit and play in the water. She was keeping her body mostly out of the spray, but she could hold her hand out and feel the water hit it. I also put the plug in, so that the tub would fill up. Play time turned into a nice, warm, calming bath time, and she went down for her afternoon nap without a fight.

To clean up the mud itself, I watered it down, then dumped half of it in the toilet and flushed it, and repeated the process with the second half. I did not consult a plumber before doing this, but I figured that toilet paper goes down the toilet all the time. It worked for me.